Freak Babylon: An Illustrated History of Teratology and Freakshows (Paperback) 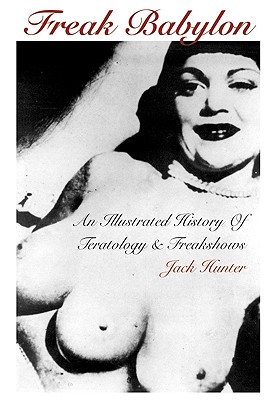 Freak Babylon: An Illustrated History of Teratology and Freakshows (Paperback)


Usually Ships in 1-5 Days
FREAKe BABYLON is a sometimes startling, sometimes disturbing documentary of the history of one of mankind's most fascinating sciences -- teratology -- and its dubious cultural correlative, the Freakshow, from ancient times to the present day. The book features over 200 rare and intriguing photos of human anomalies and covers the areas of scientific research, sideshows, cinema and body modification.
By tracing the history of teratology -- the classification of human anomalies -- and looking at some famous case histories such as the Elephant Man and Johnny Eck, FREAK BABYLON shows how medical research and exploitation are often interlinked -- and poses the question whether new sciences of cloning and genetic engineering are taking us back to the "dark days" of man-made freaks.

Bonus features include:
"The Elephant Man" by Sir Frederick Treves. Long out-of-print, this is the true account which inspired David Lynch's film of the same name.
"Dissection of a Symelian Monster" by R C Benington. A classic illustrated account of an autopsy on a real-life human anomaly, from 1891 medical journals.
An in-depth illustrated review of the controversial 1932 horror film Freaks, directed by Tod Browning.
Tod Robbins' classic short story "Spurs", which inspired Browning's Freaks.