Chicago Then and Now® (Hardcover) 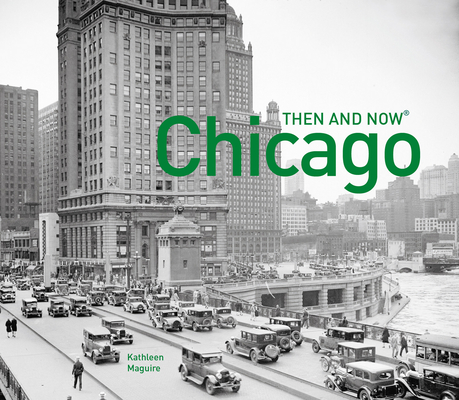 Chicago Then and Now® (Hardcover)


Usually Ships in 1-5 Days
Chicago is a city that through history has triumphed over nature and disaster. It has bounced back from a calamitous fire, re-engineered the flow of the Chicago River and challenged gravity with a series of pioneering skyscrapers. Chicago Then and Now pairs archival photos with modern views to tell the story of the city’s rich history. It is a story of determination and pride, and the evocative photos on these pages reflect the many faces of Chicago’s heritage. Sites include: Grant Park, Lincoln Park, Wabash Avenue, Lake Street, Marshall Field's, State Street, Palmer House, Reliance Building, the Chicago, Majestic and Biograph Theatres, Art Institute of Chicago, Chicago Cultural Center, South Michigan Avenue, North Michigan Avenue, Board of Trade Building, The Rookery, Old Colony Building, Dearborn Street Station, Chicago and North Western Terminal, Illinois Central Railyards, State Street Bridge, Michigan Avenue Bridge (cover image), Wacker Drive, Chicago River from the Wrigley Building, Water Tower, Lake Shore Drive, Navy Pier, Oak Street Beach, Merchandise Mart, Wrigley Field, Comiskey Park, the Union Stockyards, and much more.
Kathleen Maguire has lived in Chicago her whole life and has been a resident of the city's South, North and West Sides. She earned postgraduate degrees from the University of Illinois at Chicago and DePaul University. In her current role as a guide for Walk Chicago Tours, she brings Chicago's brilliance and magic firsthand to its visitors. She currently lives in Chicago's Logan Square.