The Hospital: How I Survived the Secret Child Experiments at Aston Hall (Paperback) 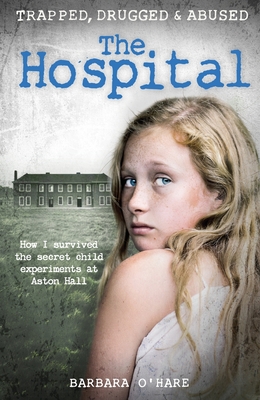 The Hospital: How I Survived the Secret Child Experiments at Aston Hall (Paperback)


Email or call for price
"We were an experiment. We had no rights, no love, nothing. Just a piece of meat for someone to play with."

Barbara O'Hare was just 12 years old when she was admitted to Aston Hall mental institution in Derbyshire. From a troubled home, she'd hoped the hospital would offer some kind of protection from all that was wrong in the world, but within hours of being there Barbara was tied down, drugged, with sodium amytl—a truth telling drug that forces a person to lose all inhibitions—and then, she believes, abused by its head physician, Dr Kenneth Milner. The drug experimentation and abuse continued throughout her eight month stay in 1971, damaging her for life mentally and physically, and setting her on a trajectory of distress throughout the rest of her life. But somehow Barbara clung on to a grain of inner strength and eventually found herself heading up one of the biggest battles of her life; telling the world the truth about Aston Hall, setting up a support group and seeking answers and justice on behalf of potentially hundreds of victims. Told with all the tenacity and passion her fellow survivors have come to love Barbara for, The Hospital is a shocking account of just how easily vulnerable and forgotten children were preyed upon by the doctor entrusted with their care and why it must never be allowed to happen again.
Barbara O'Hare was just 12-years-old when she was admitted to Aston Hall mental institution in Derbyshire.