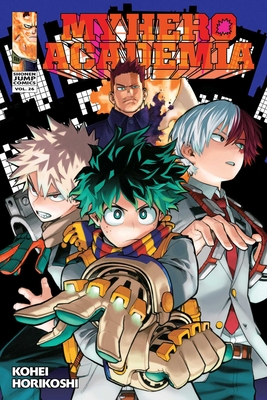 This is book number 26 in the My Hero Academia series.

Hawks and the Safety Commission have managed to get their hands on some top secret information. A big villain attack is coming, and the heroes must do all they can to prepare. As part of these preparations, Eraser Head and Present Mic pay a visit to Tartarus prison, while Midoriya, Bakugo and Todoroki begin training under Endeavor in order to become fighters who can stand on their own. In the meantime, the boys will have to survive a dinner party at the Todoroki household!
Kohei Horikoshi was born in Aichi, Japan, in 1986. He received a Tezuka Award Honorable Mention in 2006, and following the publication of several short stories in Akamaru Jump, his first serialized work in Weekly Shonen Jump was Oumagadoki Zoo in 2010. My Hero Academia is his third series in Weekly Shonen Jump.