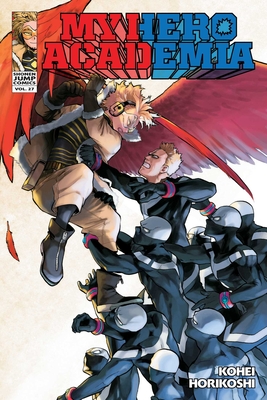 This is book number 27 in the My Hero Academia series.

The confrontation between the heroes and the villains of the Paranormal Liberation Front is about to kick off! With so much at stake, even the students of U.A. have joined the heroes to help in the coming battles. Within the PLF, Hawks continues to play a dangerous game as a double agent, but the villains have fearsome resources of their own, including whatever lurks in the doctor’s lab. Plus, with every moment that passes, Tomura Shigaraki comes closer to his ultimate form… When it all gets started, there won’t be any going back!
Kohei Horikoshi was born in Aichi, Japan, in 1986. He received a Tezuka Award Honorable Mention in 2006, and following the publication of several short stories in Akamaru Jump, his first serialized work in Weekly Shonen Jump was Oumagadoki Zoo in 2010. My Hero Academia is his third series in Weekly Shonen Jump.