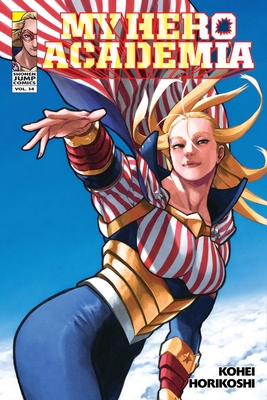 This is book number 34 in the My Hero Academia series.

All For One’s will has taken root in Tomura’s mind, and this new entity is now a global threat. Even so, the United Nations is hesitant to dispatch heroes to Japan, but Star and Stripe—the U.S.A.’s number one hero—arrives to tackle this menace head-on. In the skies over the Pacific, the combatants size each other up, trying to gain an advantage, but there’s no telling who’ll be left standing after the dust settles on this epic duel…
Kohei Horikoshi was born in Aichi, Japan, in 1986. He received a Tezuka Award Honorable Mention in 2006, and following the publication of several short stories in Akamaru Jump, his first serialized work in Weekly Shonen Jump was Oumagadoki Zoo in 2010. My Hero Academia is his third series in Weekly Shonen Jump.