Europe Knows Nothing about the Orient: A Critical Discourse (1872-1932) (Paperback) 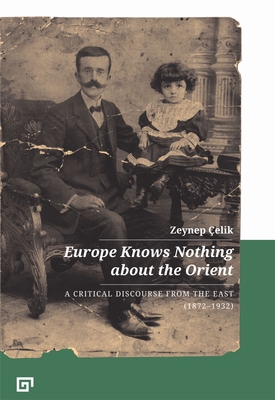 Europe Knows Nothing about the Orient: A Critical Discourse (1872-1932) (Paperback)

A century before the publication of Edward Said’s Orientalism, a passionate discourse emerged in the Ottoman Empire, rebutting politicized Western representations of the East. Until the 1930s, Ottoman and early Turkish Republican intellectuals, well acquainted with the European political and cultural scene and charged with their own ideological agendas, deconstructed tired clichés about “the Orient.” In this book, Zeynep Çelik recontextualizes Eurocentric postcolonial studies, unearthing an important episode in modern Middle Eastern intellectual history and curating a selection of primary texts illustrating the debates.
Zeynep Çelik is distinguished professor emerita at the New Jersey Institute of Technology.

Aron Aji is director of the University of Iowa’s MFA in Literary Translation program.

Gregory Key is a lecturer in modern and Ottoman Turkish at SUNY Binghamton in New York.
"Compelling in its scope and content. . . . The insightfully selected and efficiently translated texts in this volume bear witness to the emergence and entrenchment of European Orientalism from the perspective of its subjects. . . . Europe Knows Nothing about the Orient is an invitation to finally begin investigating Orientalism from the other side, from the perspective of the 'Orientals,' with all the attendant complexities and contradictions."
— Los Angeles Review of Books

"Essential reading. Magisterial and erudite, with an introduction that will be a guide to scholars for generations to come, this volume will change the way we think about history. It reveals a worldly, intellectual, cosmopolitan late-Ottoman world, one engaged both in 'projects of modernity' and in sharp critical assessment of the assumptions of European scholars regarding the ‘Orient.’ It thus has the effect of both contesting Orientalist theorists of the nineteenth century as well as disrupting those of the twenty-first, who tend to locate the enterprise of theoretical salvation of the Orient in the realm of Euro-American intellectual thought."
— Jerrilynn Dodds, Harlequin Adair Dammann Professor of Islamic Studies, Sarah Lawrence College

"Çelik introduces readers to how Ottoman and Turkish journalists, thinkers, novelists, and poets responded to Orientalist fantasies about the East, specifically about the Ottoman Empire and Turkey. Since Edward Said’s germinal work defined Orientalism as a key technique of imperialism, few studies have considered local expressions of resistance to it. Çelik’s masterful volume brilliantly curates excellent translations of stories, articles, and comments from Turkish language—themselves symptomatic for signifying imperial and nationalist dreams. Beyond providing primary sources from the ‘Ottoman East’ that add nuance to understandings of Orientalism as merely imposed upon unsuspecting and compliant subjects, the texts Çelik explores offer fascinating reading, displaying the richness and vigor of intellectual debates about Western cultural hegemony in late Ottoman Empire and early Turkish Republic. The work will contribute to understandings of Orientalism as a site of dialogue among intellectuals, and it will take its place on the bookshelves of all those who teach and research in the field."
— Selim S. Kuru, University of Washington