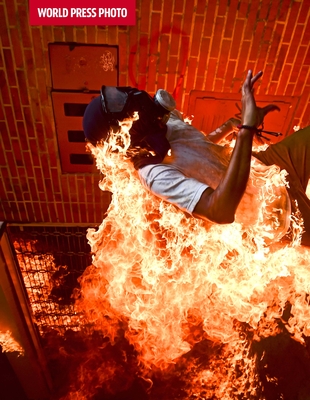 
Unavailable
Since 1955, the annual World Press Photo contest has set the standard in visual journalism. World Press Photo 2018 brings you the winners - the most striking images and compelling stories from 2017. Selected from 73,044 pictures taken by 4,548 photojournalists and documentary photographers from 125 countries, the prize-winning pictures are presented in a moving, sometimes disturbing document. World Press Photo 2018 both informs, and inspires an understanding of the world. The jury this year comprised of 18 renowned authorities on photography was chaired by Magdelena Herrera, director of photography for Geo France. The World Press Photo of the Year has been awarded to Ronaldo Schemidt for his photograph of a protester engulfed in flames during the Venezuelan Crisis in May 2017.