Catch Me Or Kill Me: The Saga Of Charles Parrott-One Of America's Best Bank Robbers (Paperback) 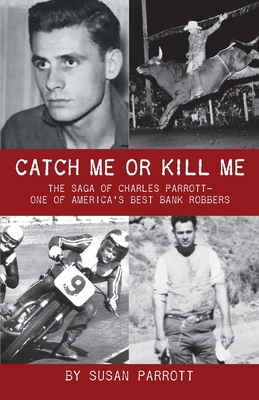 Catch Me Or Kill Me: The Saga Of Charles Parrott-One Of America's Best Bank Robbers (Paperback)

Charles Parrott is proud of his work. Not everyone can be as successful as he is at robbing banks. His job as a bootlegger in 1958 gives him the skills behind the wheel to shake anyone who dares to try to catch him. He studies each robbery, using logistics, alibies and disguises. He loves to trick and fool the FBI and it becomes a decade long game to him. His love of racing and being a rodeo rider tells you what you need to know about what drives him.

His wife, Reba Sue, is thought of as a straight arrow. Everyone thinks she's a saint, but she isn't. When his upstanding family gets dragged into his insane world, they will all stand by him.

Most people in the Adair and McCurtain Counties of Oklahoma know that he's robbing banks, but his generosity to the down and out brings protection and alibis that are solid. He's their very own "Robin Hood," and they are charmed by him.

He has a rotating group of partners, taken from his circle of cowboys, former bootlegging buddies and childhood friends. Most of them are loyal. Some don't last long. It's not a job for the faint hearted.

An FBI agent once said that he thought Parrott was the best bank robber that had ever lived. By all accounts, his story should have assured his place among notorious bank robbers in American history, but he was left out in the cold. Now his story can be told, as only his daughter can tell it.