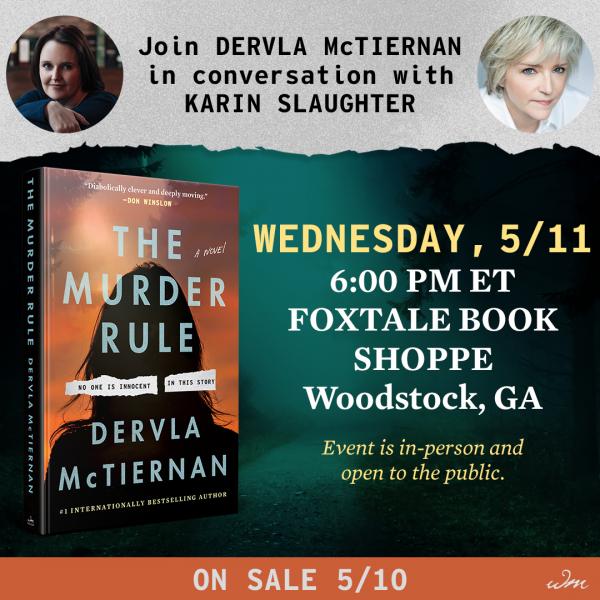 We're thrilled to welcome international bestselling author Dervla McTiernan all the way from Australia, for an IN-PERSON event!  Dervla will be in conversation with our foxy friend NYT bestselling author Karin Slaughter.  This is sure to be a fun evening. You can order a HAND-SIGNED copy below!  You can also order any of Dervla's or Karin's other books that are available on our website.

For fans of the compulsive psychological suspense of Ruth Ware and Tana French, a mother daughter story—one running from a horrible truth, and the other fighting to reveal it—that twists and turns in shocking ways, from the internationally bestselling author of The Scholar and The Ruin.

Second Rule: Make them need you.

They think I’m a young, idealistic law student, that I’m passionate about reforming a corrupt and brutal system.

They think I’m working hard to impress them.

They think I’m here to save an innocent man on death row.

They're wrong. I’m going to bury him.

Coming this August....The electrifying new thriller from Karin Slaughter, the New York Times bestselling author of Pieces of Her!

Prom Night. Longbill Beach, 1982. Emily Vaughn dresses carefully for what's supposed to be the highlight of any high school career. But Emily has a secret. And by the end of the night, because of that secret, she will be dead.

Nearly forty years later, Andrea Oliver, newly qualified as a US Marshal, receives her first assignment: to go to Longbill Beach to protect a judge receiving death threats. But Andrea's real focus isn't the judge – it's Emily Vaughn. Ever since she first heard Emily's name a year ago, she's been haunted by her brutal death. Nobody was ever convicted – her friends closed ranks, her family shut themselves off in their grief, the town moved on – so the killer is still out there. But now Andrea has a chance to find out what really happened…

You can order a HAND-SIGNED copy below!  You can also order any of Dervla's or Karin's other books that are available on our website.

The Murder Rule: A Novel (Hardcover)