The History of the Church: A New Translation (Paperback) 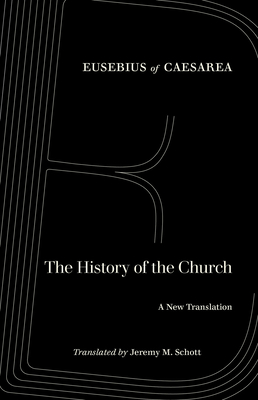 The History of the Church: A New Translation (Paperback)

By Eusebius of Caesarea, Jeremy M. Schott (Translated by)


Usually Ships in 1-5 Days
Eusebius’s groundbreaking History of the Church, remains the single most important source for the history of the first three centuries of Christianity and stands among the classics of Western literature. His iconic story of the church’s origins, endurance of persecution, and ultimate triumph—with its cast of martyrs, heretics, bishops, and emperors—has profoundly shaped the understanding of Christianity’s past and provided a model for all later ecclesiastical histories. This new translation, which includes detailed essays and notes, comes from one of the leading scholars of Eusebius’s work and offers rich context for the linguistic, cultural, social, and political background of this seminal text. Accessible for new readers and thought-provoking for specialists, this is the essential text for anyone interested in the history of Christianity.

Jeremy M. Schott, Associate Professor of Religious Studies at Indiana University, has published extensively on religion, philosophy, and culture in the era of Eusebius and Constantine. His previous books include Christianity, Empire, and the Making of Religion in Late Antiquity.
"Students of ancient Christianity and general readers will find here a lucid translation and a helpful guide to the study of an important source for early Christian history."
— Church History and Religious Culture

"This outstanding version will soon become standard in courses, for it is in every way superior to its competition."
— Review of Biblical Literature

"Schott's translation was a bold undertaking; it has generated a monumental achievement. It certainly deserves to become the next generation's standard English version of Eusebius' History."
— Studies in Late Antiquity

"A singular achievement in Eusebian studies. . . . This volume will become the standard translation."
— Journal of Classics Teaching

"This new translation offers contemporary readers an accessible text with insights into the cultural and social influences that shaped Eusebius’ story of Christianity."
— Reading Religion

"A remarkable work of scholarship. . . . Schott’s translation has certainly become the first I turn to."
— Ancient Jew Review