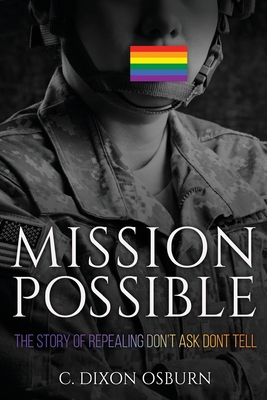 Under "Don't ask, don't tell," the Pentagon discharged 2-4 service members every day for being gay. Some were subjects of witch hunts. Others faced criminal charges. Many endured harassment, assault and threats. Mission Possible takes readers behind the scenes as Servicemembers Legal Defense Network lawyers repeatedly rushed to the aid of LGBT clients and demanded justice from commanders and Congress.

Repealing the ban on open service by lesbian, gay and bisexual service members was a stunning reversal of a law enacted just 17 years prior. It remains the most significant pro-lesbian, gay, bisexual legislation Congress has passed. How did it happen?

C. Dixon Osburn's Mission Possible describes the strategy that he and Michelle Benecke, co-founders of SLDN devised to overcome impossible odds. It's a story about the politics of fear and the consequences of a government that tries to muzzle its citizens. It is also a searing, heartbreaking, and ultimately triumphant story of the power of coming out, building a movement, and political savvy. Mission Possible shows that overcoming the odds is both possible and essential.