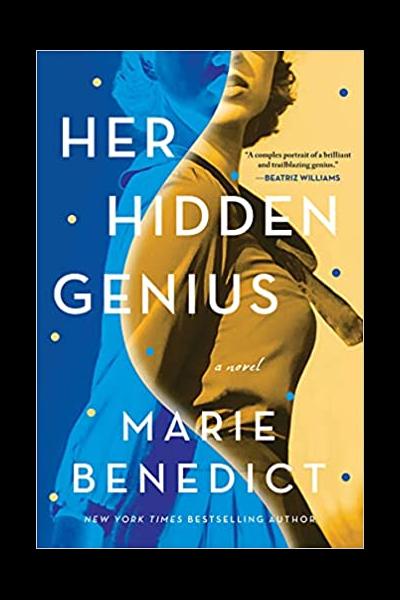 Join Marie Benedict and Beatriz Williams as they celebrate the launch of Marie's new book, Her Hidden Genius.

***EVERYONE REGISTERED THROUGH EVENTBRITE WILL RECEIVE A ZOOM LINK TWO DAYS IN ADVANCE OF THE EVENT!***

To register for Zoom event: https://www.eventbrite.com/.../virtual-launch-event-marie...

About Her Hidden Genius by Marie Benedict:

Rosalind Franklin has always been an outsider—brilliant, but different. Whether working at the laboratory she adored in Paris or toiling at a university in London, she feels closest to the science, those unchanging laws of physics and chemistry that guide her experiments. When she is assigned to work on DNA, she believes she can unearth its secrets.

Rosalind knows if she just takes one more X-ray picture—one more after thousands—she can unlock the building blocks of life. Never again will she have to listen to her colleagues complain about her, especially Maurice Wilkins who'd rather conspire about genetics with James Watson and Francis Crick than work alongside her.

Then it finally happens—the double helix structure of DNA reveals itself to her with perfect clarity. But what unfolds next, Rosalind could have never predicted.

Marie Benedict's powerful new novel shines a light on a woman who sacrificed her life to discover the nature of our very DNA, a woman whose world-changing contributions were hidden by the men around her but whose relentless drive advanced our understanding of humankind.

About Marie Benedict: Marie Benedict is a former lawyer and the author of novels inspired by women whose achievements have been overlooked or underappreciated throughout history and are highly relevant and critical to modern life. She has been featured in The New York Times, The Washington Post, The Los Angeles Times, CBS This Morning, and Good Morning America. Her books include the New York Times bestsellers The Only Woman in the Room, The Mystery of Mrs. Christie, and The Personal Librarian (co-authored with Victoria Christopher Murray), as well as The Other Einstein, Carnegie’s Maid, and Lady Clementine.

About Beatriz Williams: Beatriz Williams is the bestselling author of eight novels, including the New York Times bestsellers The Summer Wives and A Hundred Summers, The Secret Life of Violet Grant, A Certain Age, Our Woman in Moscow, and The Golden Hour. A native of Seattle, she graduated from Stanford University and earned an MBA in finance from Columbia University, then spent several years in New York and London as a corporate strategy consultant before pursuing her passion for historical fiction. She lives with her husband and four children near the Connecticut shore, where she divides her time between writing and laundry.

Beatriz Williams's new novel The Lost Summers of Newport releases May 17, 2022 and is available now for pre-order.

Her Hidden Genius: A Novel (Hardcover)

Our Woman in Moscow: A Novel (Hardcover)